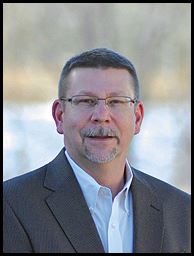 Pastor Kevin accepted Jesus Christ as his Lord and Savior in a 5th floor conference room at 1475 Lawrence Street, in Denver, Colorado, late one night in February of 1992. While he was attending a Calvary Chapel in Denver at the time of his conversion, it was actually a close friend at work who led him to the Lord. This is why he believes so strongly in personal evangelism.

He has been married to his beautiful wife Denise since 1984. They have been blessed with three wonderful children who love and are serving Jesus.

Pastor Kevin and his wife Denise have been involved in ministries within Calvary Chapels for over two decades, both having originally served in children’s ministry for several years, before being called to Calvary Chapel of South Denver in 1994. They served at Calvary Chapel of South Denver for 9 years, where Kevin originally served as worship leader, then on the Board of Directors, and ultimately as a leader in the men’s ministry. His wife Denise served as a leader in the women’s ministry, prayer ministry and in counseling.

Kevin is the founding pastor of Calvary Chapel of Loveland, serves as a chaplain with the Loveland Police Department, and serves on the boards of Calvary Chapel Of Charleston (http://www.cccharleston.org), Haven Ministries (http://www.havenministry.com/), and House of Neighborly Service (http://www.honservice.org/). He studied Electrical Engineering and Computer Science at the University of Colorado at Boulder and has spent over three decades in the technology industry, holding positions in venture finance management, executive-level management, research and development, product and project management, and system design and development. He served as a charter member of the Sybase Internet Advisory Council and was a recipient of the bronze medal from the Smithsonian Institute for Outstanding Technology Achievement.

Pastor Kevin’s teaching style is unassuming and uncompromising. His passion is teaching the Word of God verse-by-verse, line upon line, precept upon precept, so that it is meaningful, practical, and relevant. Through this kind of teaching, people from all walks of life can gain a deep and rich understand God’s love and grace toward them as they grow in the grace and knowledge of our Lord and Savior Jesus Christ.

Pastor Kevin Cox (PK2) dedicated his life to Jesus Christ as his Lord and Savior December 7th 1995 in Fort Collins, Colorado. He has been blessed with an amazing friend and bride (BJ) who truly is a gift from God. They married June 20th 2006 and have been blessed with two amazing girls, Cora Aliyah and Kathrine Margaret.

PK2 has been involved in varies areas ministries throughout Northern Colorado with a primary focus on adult ministries and expositional teaching. He has a passion for exegetical studies in order to rightfully divide the Word of God and properly apply it’s meaning to our lives for a productive, godly living. He enjoys reading the history of Christianity as well as the Puritans.

He serves on the community boards for House of Neighborly Services, Aims Community College and the Immanuel Lutheran School. Kevin Also sits on a newly formed Suicide Prevention Committee for the Northern Colorado area. He studied Computer Science and has spent 17+ years in the technology industry, co-founder of two technology businesses and currently holds the positions of CEO.